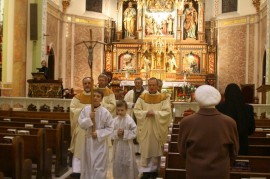 Cardinal Jozef Glemp was elevated to cardinal by Blessed Pope John Paul II in 1983, and was Archbishop of Warsaw from 1981 to 2006.

The principal Homilist was Rev. Konstanmty Pryszyuski from St. Rose of Lima Parish in New York. A Catafalque memorial was setup in the church to honor the late Cardinal who grew up under the rule of Nazi Germany and ordained more than 2,000 priests in Poland.﻿﻿

St. Aldegunais: Saint of the Day for Monday, January 30, 2023 (Mon, 30 Jan 2023)
Virgin and abess, also known as Adelgundis, Aldegonde, or Orgonne. She was a member of the royal family of the Merovingians and was raised by two saints: St. Walbert and St. Bertila, her parents. The family resided in the Hainault region of Flanders, a region of the Low Countries. Aldegundis reflused offers of marriage from other nobles and received the veil from St. Amandius, the bishop of Maastricht. She followed this ceremony of acceptance into the religious life with the foundation of a ...
>> Read more