The parish of Saint Adalbert in Port Richmond, Philadelphia is pleased to share this photo album of the church, which was built in 1903. This church is rich in detail with stain glass windows that depict various saints of the Catholic Church and saints important to Catholicism in Poland.

The church is also adorned with various wood carvings of saints, such as the large statues of Saints Peter and Paul at the altar, and the Blessed Mother and Sacred Heart at the side altars. 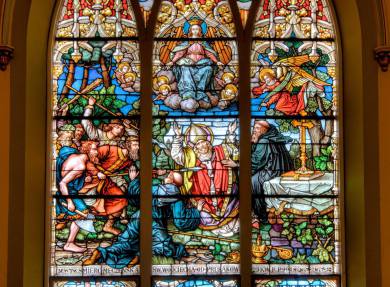 Proclamation the Mother of God to be Queen of the Polish Crown.  Ogłoszenie Matki Boskiej Królową Korony Polskiej. 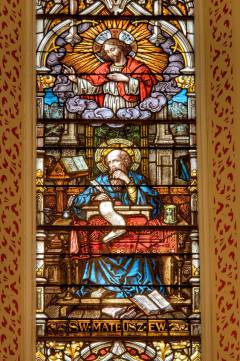 Matthew the Apostle ( "Gift of YHVH"; also known as Saint Matthew and as Levi) was, according to the Bible, one of the twelve apostles of Jesus and, according to Christian tradition, one of the four Evangelists. Among the early followers and apostles of Jesus, Matthew is mentioned in Matthew 9:9 and Matthew 10:3 as a publican who sat at the "receipt of custom" in Capernaum who was called into the ministry of the twelve by Jesus. 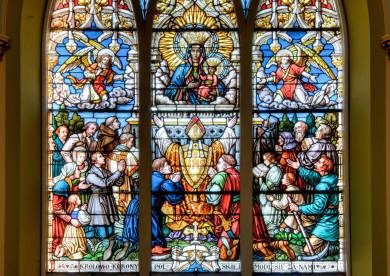 The Black Madonna of Częstochowa (Polish: Czarna Madonna or Matka Boska Częstochowska), also known as Our Lady of Częstochowa, is a revered icon of the Virgin Mary housed at the Jasna Góra Monastery in Częstochowa, Poland. She miraculously saved the monastery of Jasna Góra (English: Bright Mount) from a Swedish invasion. In August 1382 the hilltop parish church was transferred to the Paulites, a hermetic order from Hungary. The golden fleur-de-lis painted on the Virgin's blue veil parallel the heraldic azure, semee de lis, or of the French royal coat of arms and the most likely explanation for their presence is that the icon had been present in Hungary during the reign of either Charles I of Hungary and/or Louis the Great, the Hungarian kings of the Anjou dynasty, who probably had the fleur-de-lis of their family's coat of arms painted on the icon. This would suggest that the icon was probably originally brought to Jasna Gora by the Pauline monks from their founding monastery in Hungary.
The Siege of Jasna Góra took place in the winter of 1655 during the Second Northern War, as the Swedish invasion of the Polish-Lithuanian Commonwealth is known. The Swedes were attempting to capture the Jasna Góra monastery in Częstochowa. Seventy monks and 180 local volunteers, mostly from the szlachta (Polish nobility), held off 4,000 Swedes for forty days, saved their sacred icon and, according to some accounts, turned the course of the war.
This event led King John II Casimir Vasa to "crown" Our Lady of Częstochowa ("the Black Madonna") as Queen and Protector of Poland in the cathedral of Lwów on April 1, 1652. 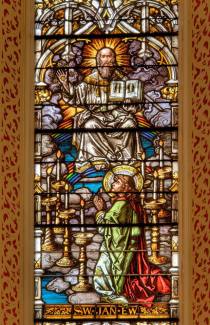 John the Evangelist (also John the Theologian or John the Divine), is the purported author of the Gospel of John, and presumably other Johannine works in the New Testament – the three Epistles of John and, according to some, the Book of Revelation. 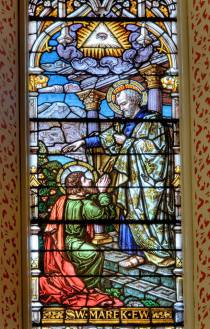 Mark is the traditionally purported author of the Gospel of Mark. One of the Seventy Disciples, Mark founded the Church of Alexandria, one of the original three main episcopal sees of Christianity. His feast day is celebrated on April 25, and his symbol is the winged lion.

According to Eusebius (Eccl. Hist. 2.24.1), Mark was succeeded by Annianus as the bishop of Alexandria in the eighth year of Nero (62/63), probably, but not definitely, due to his coming death. Later Coptic tradition says that he was martyred in 68. 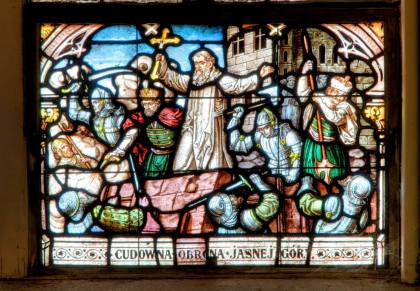 "Cudowna Obrona Jasnej Gory" (The defense of Jasna Gora) The Siege of Jasna Góra (also known less accurately as the Battle of Częstochowa, Polish: Oblężenie Jasnej Góry) took place in the winter of 1655 during the Second Northern War / The Deluge — as Swedish invasion of the Polish-Lithuanian Commonwealth is known. The Swedes were attempting to capture the Jasna Góra monastery in Częstochowa. Their month-long siege however, was ineffective, as a small force consisting of monks from the Jasna Góra monastery led by their Prior and supported by local volunteers, mostly from the szlachta (Polish nobility), fought off the numerically superior Germans (who were hired by Sweden), saved their sacred icon, the Black Madonna of Częstochowa and, according to some accounts, turned the course of the war. 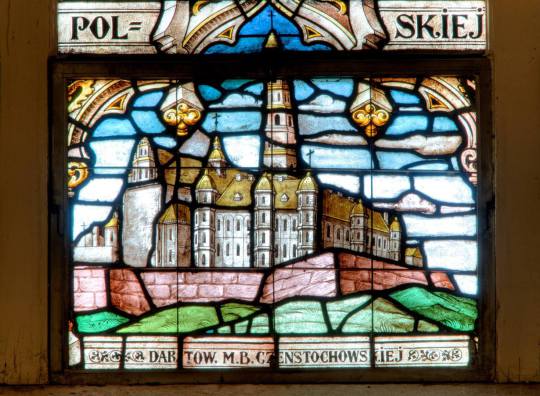 Picture of Monastery of Jasna Gora (Częstochowa). Donation from Sodality of Our Lady of Czestochowa. In Christian theology, a sodality is a form of the "Universal Church" expressed in specialized, task-oriented form as opposed to the Christian church in its local, diocesan form (which is termed modality). In English, the term sodality is most commonly used by groups in the Catholic Church, where they are also referred to as confraternities. 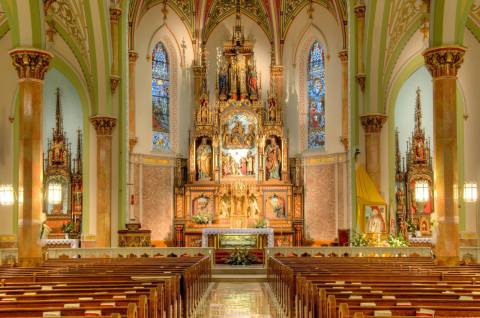 The Redros from the rear of the church

While the church building was complete, its interior finishings were not completed until many years later. In 1926, the church interior was painted for the first time, news pews were installed and the pulpit was ordered from the builder of the wood alters in Tirol, Austria. 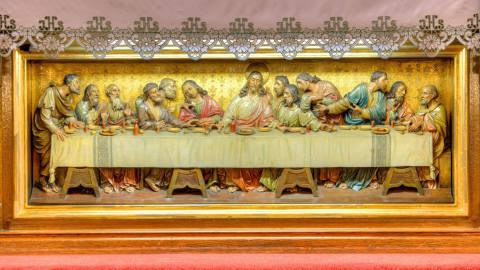 "The Last Supper" is the final meal that, in the Gospel accounts, Jesus shared with his Apostles in Jerusalem before his crucifixion. The Last Supper is commemorated by Christians especially on Maundy Thursday. Moreover, the Last Supper provides the scriptural basis for the Eucharist also known as "Holy Communion" or "The Lord's Supper". 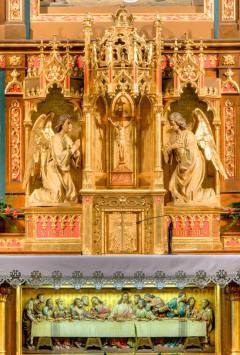 The center of the Reredos shows the Crucified Jesus flanked by two angels, and a Last Supper on the bottom of the Altar. 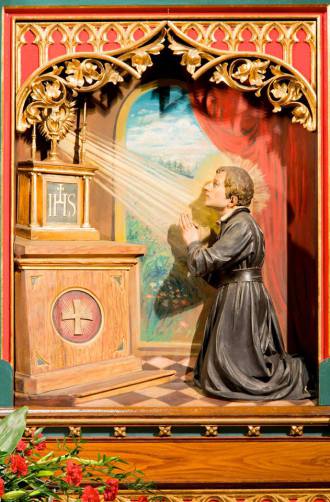 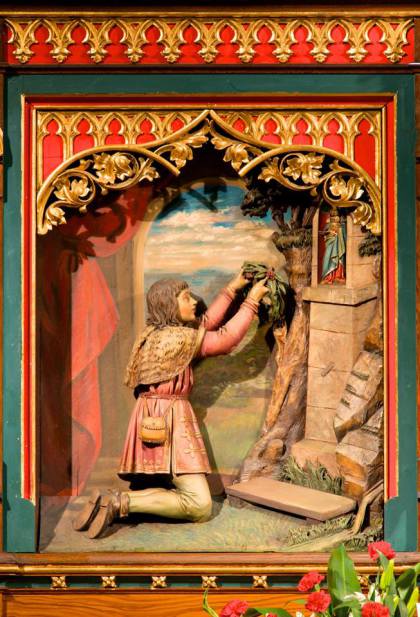 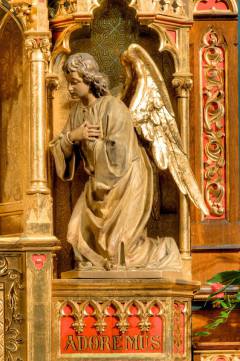 On either side of the tabernacle are the Latin words "Venite Adoremus", come and adore him.

In 1905 the property on the corner of Thompson and Madison Streets in Port Richmond was purchased for what would become the parish of Saint Adalbert Church. Construction of the church would not commence until the spring of 1908 by John H. McShaine & Company. The cornerstone was blessed by Bishop Edmond Pendergast on May 10, 1908.

On August 29, 1908 the completed church was blessed by Archbishop Patrick Ryan. The Sisters' convent was built in 1914 by the same architect that built the church. The sisters moved in on January 1, 1915. The present day rectory was built later that year.

The three wood altars were built by Ferdinand Stuflesser in Tirol, Austria. The church's stained glass windows were imported from Muller, Germany. The church's marble altar rail was imported from Italy. While the church building was complete, its interior finishings were not completed until many years later. In 1926, the church interior was painted for the first time, news pews were installed and the pulpit was ordered from the builder of the wood alters in Tirol, Austria. The chuch steeples would receive their present day copper plating in September 1954.

Over the years, the church would receive several renovations, such as moving the confessionals to the rear of the church in 1973, the interior repainted in 1974, and refinishing of the pews  in 1975. In 1980, the plaque commemorating Pope John Paul II's visit to St. Adalbert church in 1976 as Cardinal Wojtyła﻿ was installed and the church bells were electrified. In 1981, new doors were installed. Many renovations were done in 1985 which included repairs to the steeples, pipe organ refurbishment and repairs to the boilers which heat the church, school and rectory. In 1989, a new tabernacle was donated by Fr. Joseph Stec.

In 1996, the parish was surveyed on installing air conditioning to the church, and the majority of parishoners were against making alterations to accomodate the installation. The church's pipe organ again required major repairs this year, costing the parish $30,000. The present day marble floor was installed in 2010.

St. Adalbert School, which closed in 2006 but lives on as Our Lady of Port Richmond Regional Catholic School, was built in 1922 and was blessed by Dennis Cardinal Dougherty on April 22, 1923. In 1953 the addition was built on to the school to accomodate more students which also included the present day parish hall, with the cornerstone being blessed on May 30, 1954 by Msgr. Casimir Lawniczak, pastor of St. John Cantius Parish.

St. Dominic: Saint of the Day for Monday, August 08, 2022 (Mon, 08 Aug 2022)
Saint Dominic was born in Caleruega, Spain in 1170. His parents were members of the Spanish nobility and related to the ruling family. His father was Felix Guzman, and was the royal warden of the village. His mother, Bl. Joan of Aza, was a holy woman in her own right. According to one legend, his mother made a pilgrimage to an abbey at Silos. Legend says there were many signs of the great child she would bear. One of the most common legends says that during the pilgrimage, Joan had a dream of ...
>> Read more