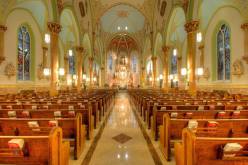 9:00 AM Angielska/English (during school year only)

On the16th of each month, after the morning Mass - devotions and veneration of the relic.

Adoration of the Blessed Sacrament takes place every Thursday after 7:30 AM Mass to 9:00 AM. At this time we will have Benediction.﻿ 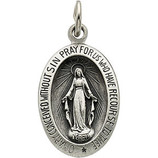 Every Saturday after 7:30 AM Mass﻿

The word novena is derived from the Latin word 'novem' meaning 'nine'. A novena is a traditional Roman Catholic devotion consisting of a powerful set of prayers prayed publicly or privately, most commonly on nine consecutive days, and usually for a special intention. One does not have to be Catholic to pray a novena, all who desire to become closer to our Lord are welcome to experience the many blessings this special form of prayer can bestow. Novenas are often prayed when going through difficulty and crisis in one’s life or at any other time one is seeking special graces, guidance or intercession. Virtually all novenas can be said at any time of the year but some are also particularly appropriate for certain times of the year.

The Miraculous Medal, originally known as the medal of the Immaculate Conception, was shown to Saint Catherine Labouré on November 27, 1830 by the Blessed Virgin Mary. Catherine saw Our Lady standing on a globe, with Brilliant rays of light streaming down from her outstretched fingers. Around the figure was the inscription: O Mary, conceived without sin, pray for us who have recourse to thee. Mary instructed Catherine: "Have a medal struck upon this model. Those who wear it will receive great graces, especially if they wear it around the neck."

On the reverse she was shown the letter M with a cross monogram, below it was the Sacred Heart of Jesus crowned with thorns, and the Immaculate Heart of Mary pierced with a sword.

The medals were first made and distributed in Paris in 1832, upon approval by the Catholic Church. Almost immediately many blessings were bestowed upon wearers of the medal, just as Mary had promised. Use of the medal today is worldwide, and the stories of the blessings continue to be spread.

St. Aldegunais: Saint of the Day for Monday, January 30, 2023 (Mon, 30 Jan 2023)
Virgin and abess, also known as Adelgundis, Aldegonde, or Orgonne. She was a member of the royal family of the Merovingians and was raised by two saints: St. Walbert and St. Bertila, her parents. The family resided in the Hainault region of Flanders, a region of the Low Countries. Aldegundis reflused offers of marriage from other nobles and received the veil from St. Amandius, the bishop of Maastricht. She followed this ceremony of acceptance into the religious life with the foundation of a ...
>> Read more