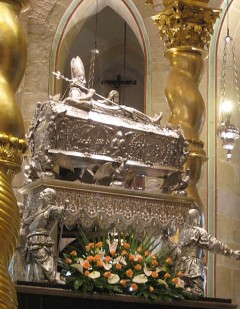 Adalbert (Vojtěch) was born into a noble Czech family of Prince Slavník and his wife Střezislava in Libice nad Cidlinou, Bohemia.

TheChambers Biographical Dictionary mistakenly gives his year of birth as 939.His father was a rich and independent ruler of the Zličanprincedom that rivaled Prague . Adalbert had five full brothers: Soběslav (Slavnik's heir), Spytimír, Pobraslav, Pořej, Čáslav and a half-brother Radim (Gaudentius) from his father's liaison with another woman. Radim chose a clerical career as did Adalbert, and took the name Gaudentius. Adalbert was a well-educated man, having studied for about ten years (970-80) in Magdeburgunder Saint Adalbert of Magdeburg. Upon the death of his mentor, he took the name Adalbert. Gifted and industrious, Adalbert soon became well-known all over Europe.﻿

In 982, still not yet thirty years old, Adalbert became the Bishop of Prague. Although Adalbert descended from a rich family and could afford comfort and luxury, he lived poorly of his own free will. He was noted for charity, austerity, and zealous service to the Church. His duty was difficult even in baptized Bohemia, as the pagan creed was deeply embedded in the peoples' minds. Adalbert complained of polygamy and idolatry, which still were not unusual among the Czechs. He also strongly resented the participation of baptized Christians in the slave trade.﻿

In 980 Adalbert finished his studies at Magdeburg school and returned to Prague, where he became a priest. In 981 his father, Prince Slavnik, and both his mentors died.

Four years later, in 993, Pope John XV sent him back to Bohemia. Adalbert became the Bishop again. That time he founded a monastery in Břevnov, near Prague, the first one in the Czech lands. Nonetheless, the nobility there continued to oppose his ministry. Also, according to Cosmas' chronicle, high clerical office was a burden to Adalbert, and in 994 he offered it to Strachkvas who was Přemyslid and Duke Boleslav's brother. Strachkvas, nevertheless, refused.﻿

In 989 he resigned from his bishop's cloth and left Prague. He went to Rome and lived as a hermit in St. Alexis Benedictine monastery

When they did not heed warnings to stay away from the sacred oak groves, Adalbert was martyred in April 997 on the Baltic Sea coast east of Truso (currently Elbląg, Elbing), or near Tenkitten and Fischhausen (see external link map St. Albrecht) It is recorded that his body was bought back for its weight in gold by Boleslaus the Brave.

Adalbert of Prague had already in 977 entertained the idea of becoming a missionary in Prussia. After he had converted Hungary, he was sent by the Pope to convert the heathen Prussians.[3] Boleslaus the Brave, duke of Poland (later king), sent soldiers with Adalbert. The bishop and his followers - including his half-brother Radim (Gaudentius) - entered Prussian territory and went along the Baltic Sea coast to Gdańsk.

It was a standard procedure of Christian missionaries to try to chop down sacred oak trees, which they had done in many other places, including Saxony. Because the trees were worshipped and the spirits who were believed to inhabit the trees were feared for their powers, this was done to demonstrate to the non-Christians that no supernatural powers protected the trees from the Christians.

April 1997 was the thousandth anniversary of Saint Adalbert's martyrdom. It was commemorated in the Czech Republic, Poland, Germany, Russia and other countries. Representatives of Catholic, Greek Orthodox, and Evangelical churches pilgrimaged to Gniezno, to the saint's tomb. John Paul II visited Gniezno and held a ceremonial divine service in which heads of seven European states and about a million believers took part.﻿

St. John Baptist de Rossi: Saint of the Day for Monday, May 23, 2022 (Mon, 23 May 2022)
St. John Baptist de de Rossi, also known as Giovanni Battista de' Rossi, was born on February 22, 1698 in Voltaggio, Italy. He was the fourth child of Charles de Rossi and Frances Anfossi, known to be a holy and faith filled couple. Though John's family was not financially wealthy, they were rich in faith. Through their guidance and a wonderful education, John learned to excel in his living faith, piety and gentleness. A pair of priests, Scipio Gaetano and Giuseppe Repetto, saw great ...
>> Read more